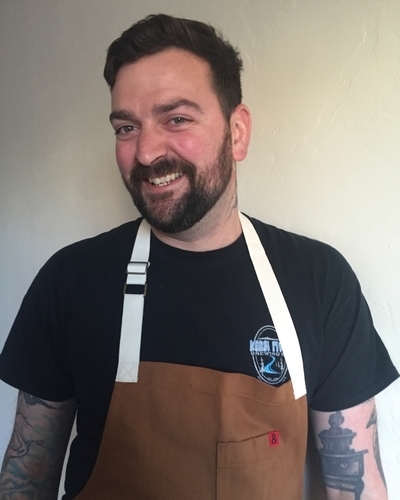 Participating In: Coast by Coast

Born and raised in Soldotna, Alaska, Alex knew at a young age he wanted to be a chef and see the world. He graduated high school and moved to Portland, Oregon for culinary school where he met his wife and fellow chef,  Jen. Alex spent nearly a decade cooking around Portland and the couple then moved to San Francisco with a short stint in Austin, Texas, ultimately returning to San Francisco where Alex became the Chef De Cuisine at Michelin-starred Sons and Daughters.

After five years at the helm of Sons and Daughters, the couple decided to return to Portland, Oregon with their young son, Quinn.

Alex took the position of Executive Chef at restaurant Dottir in the Kex Hotel where he showcased the style and skill he honed in his travels in both the main dining room and also the more elegant rooftop space.  Alex managed to balance a very rustic-sounding cuisine with a refined understanding of the many specialty ingredients available in the Pacific Northwest.

He has a great passion for Old World Techniques with a love of Americana traditions. Today, Alex hopes to impart his experience and unique skill set to the brigade of cooks and staff that are the backbone of his work at General Harvest Restaurant Group.