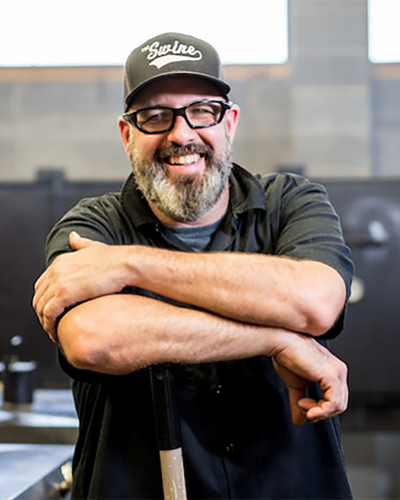 The son of a butcher, Anthony DiBernardo’s childhood meals almost always centered around a cut of meat. So when DiBernardo found himself working in the kitchen as a banquet cook at the young age of fourteen, he felt right at home. Since then DiBernardo has dedicated his life to food and family, and for the last three decades, he has been making his name known in Charleston, South Carolina’s culinary industry.

After literally “surfacing” in Charleston onboard the Fast Attack Submarine USS Batfish as a Naval cook in 1990, DiBernardo continued his culinary career in the Holy City’s budding restaurant scene. He has served as executive chef at Kiawah Island Resorts and has worked in the kitchens of numerous celebrated Charleston establishments including Blossom, Mustard Seed and Rita’s.

After years of working and learning alongside some of Charleston’s best chefs, the stage was set for DiBernardo to open Swig & Swine, fulfilling a life long dream. With a commitment to community and an adoration for barbecue, DiBernardo formed Swig & Swine in 2013, and since then the eatery has become a fast favorite in the Lowcountry because of DiBernardo’s authentic all-wood smoked barbecue. “I may not come from a family of pitmasters, but I do come from a bloodline of damn good cooks. All I’ve ever wanted to do is cook and make people happy through food,” DiBerardo says.

Today DiBernardo is the larger than life Pitmaster and Owner of four Swig & Swine barbecue joints in SC, with locations in downtown Charleston, West Ashley, Mount Pleasant, and Summerville. With DiBernardo at the helm, Swig & Swine is consistently listed among “Best Barbecue in Charleston” lists for Eater and Thrillist, and voted numerous awards by Post & Courier, Charleston City Paper, and Summerville Journal Scene for its barbecue, ribs, wings and more.