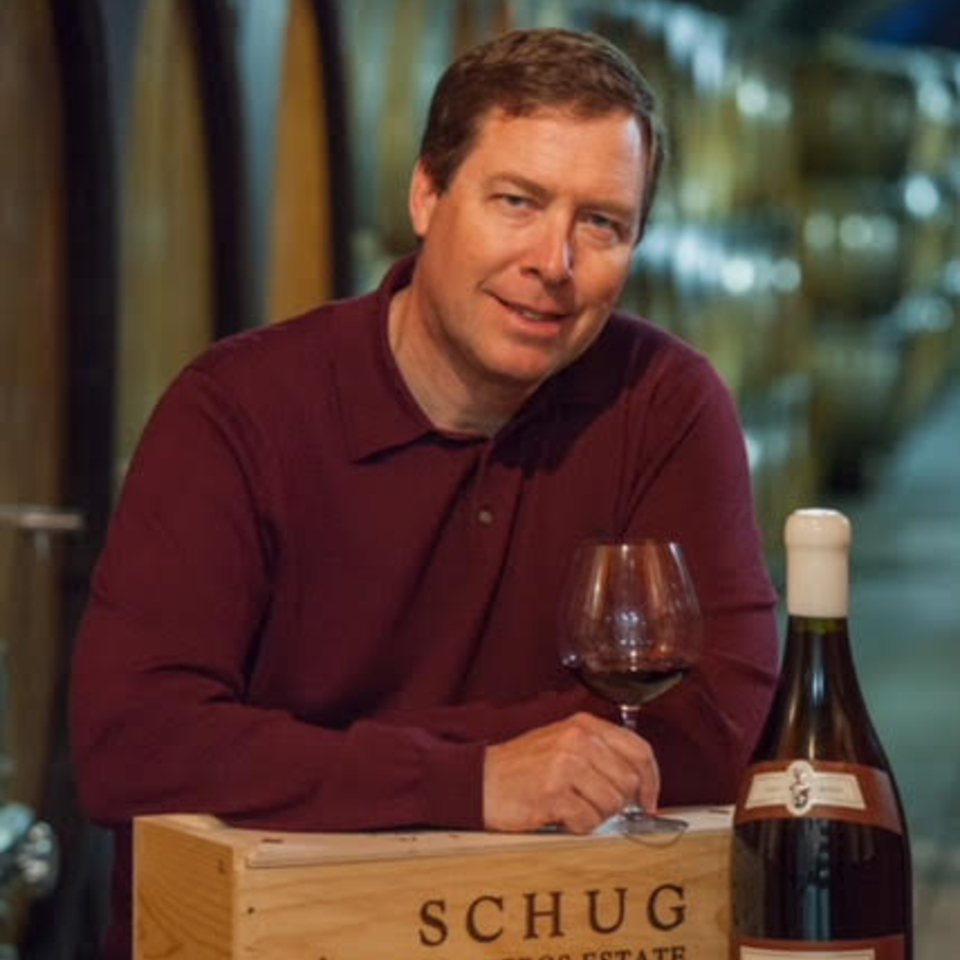 Axel Schug grew up in the Napa Valley, where his father Walter rose to international fame as the founding winemaker of Joseph Phelps Vineyards. His classmates in St. Helena were kids from several other pioneering wine families, including Duckhorn, Rombauer, Schramsberg and Spottswoode. “As far as we knew, we were nothing special back then” remembers Axel. “But today, when I see my own son and daughter enjoying a wine their grandfather made to commemorate their birth year, I realize being a part of a winemaking family offers a degree of perspective and grounding that I can’t imagine experiencing any other way.”

In 1980 his father started his own label at Phelps to focus on Pinot Noir. However, with no family vineyard or winery of their own to be involved in, Axel had already planned on a career in the aerospace industry, so in 1982 he left the Napa Valley to study at San Diego State. But in 1984, the same year his father left Phelps to go it alone, Axel was already yearning to get back to Northern California. “I guess I realized that I was never going to be a rocket scientist, and maybe there was a future for me in the wine business.” That year he transferred to UC Davis and graduated in 1987. After a few years in the hotel business working for Hyatt at Lake Tahoe, a phone call from his parents came with some exciting news. “I remember my father saying he had found some land in Carneros to plant a vineyard and build a winery on, and he wanted me to come home for the weekend to take a look at it. When I got there and saw the land, something clicked and I realized this was place that I would be spend the rest of my life at.”

In 1989 Axel joined the winery full time, taking part in all aspects of production and distribution. “At the time we were relatively small, producing only 4,000 cases,” recalls Axel. “That meant I worked the crush and in the cellar, bottled wines, and made deliveries.” After a few years, his love of travel took over and he discovered he enjoyed meeting people around the country to share his passion for the family’s wines. An avid fly fisherman, he spent many years developing smaller markets in the Mountain West and Southeast. Over the next two decades he would play a key role in expanding the winery’s sales. “Our goal was to reach 10,000 cases,” says Axel. “But thanks to the boom in demand for Pinot Noir and our unique style of Chardonnay, we shot right past that goal.” Current production is 40,000 cases, with distribution nationwide and on 4 continents.

Today with growth no longer Axel’s primary concern, he spends more time at his home in Napa with his wife Kristine, son Stephen and daughter Bess. His current role as Managing Partner has him focused on building the winery’s new visitor center opening in 2019. “It was always my parents’ dream to see that built, and it’s something I want to leave for my kids to be a part of.” Axel still travels on occasion, usually with a fly rod along and in search of a quiet stream.