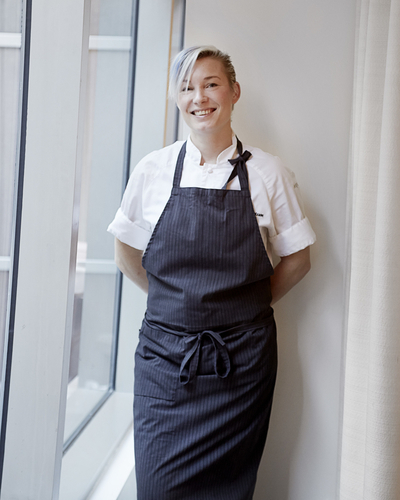 Emma Bengtsson grew up in the small Swedish fishing village of Falkenberg and originally wanted to be a fighter pilot. In her youth, Emma would go to shooting ranges with her father in preparation for a military career, however, her grandmother was an avid home cook and inspired her to go on to study at the International Restaurant School in Stockholm at the age of 16. Emma went on to stage as a pastry chef at Edsbacka Krog — the only Swedish restaurant to hold two Michelin stars at the time. Here, she discovered she enjoyed working as a pastry chef and after graduating, she continued to work at the restaurant for four years. She then went on to work at Operakällaren within the Royal Swedish Opera as a pastry chef for five years.

After vacationing in Mexico and a quick stop in Manhattan, Emma knew she wanted to move to New York City. In 2010, at 29-years-old, she got her chance when then Aquavit Executive Chef Marcus Jernmark recruited her to join the team as pastry chef. Her interpretation of classic Scandinavian desserts quickly garnered critical acclaim with Aquavit winning a Michelin star. Emma caught the attention of owner Hakan Swahn, who offer her the Executive Chef position in 2014 when Jernmark resigned. Although Emma was initially hesitant and refused, she took her delicate approach to pastry and adapted it to savory dishes which led to the restaurant being award two Michelin stars the same year. This award made her the first Swedish women to hold two Michelin stars and only the second in the United States after Dominique Crenn.

In 2016, under Emma’s culinary direction, Aquavit opened a second restaurant in London. At Aquavit, Emma is serving the kind of food she likes to eat. The fare us true to Scandinavia offering light and bright dishes with a focus on fresh ingredients, seafood and traditional methods like pickling and preserving.

Now, Emma has revamped the menu at Aquavit, adding a fresh new take and expanded bar menu. The menu now allows diners to enjoy a full meal at the bar offering an extensive selection of snacks, starters, mains and desserts. In the main dining room, guests can now enjoy her three, five and eight-course tasting menus.