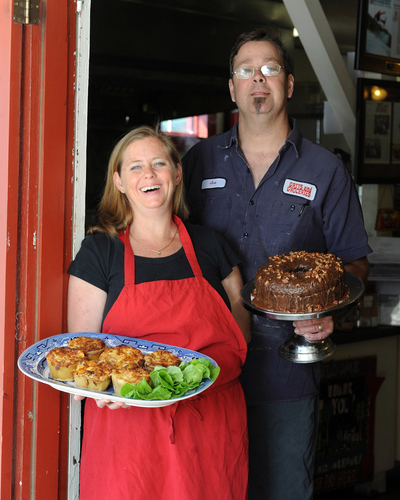 Participating In: A Trip to the French Quarter, Feast by the Field Saturday and Sunday Supper

Heidi is the owner and chef at Grits and Groceries, a destination restaurant in Belton, South Carolina featuring her signature eclectic southern cooking. A restaurateur for 25 years, Heidi has developed her creative southern dishes through years of training and experimentation and has championed of farm-to-table food for decades.

Raised on a large farm in South Carolina, Heidi taught herself to cook as a kid by making everything in the classic Charleston Receipts cookbook. She went on to study at Johnson and Wales in Charleston, then worked with outstanding chefs like Elizabeth Terry at Elizabeth’s on 37th Street in Savannah, and Emeril Lagasse at Nola in New Orleans.

Heidi fit right into the tradition of culinary excellence in New Orleans, and opened the award-winning Elizabeth’s Restaurant. People were drawn to her creative comfort food and easy going mood, and Elizabeth’s received rave reviews in Gourmet and Southern Living, and was featured on CBS Sunday Morning.

Heidi and her husband Joe (an incredible chef in his own right) returned to South Carolina to open Grits and Groceries in a refurbished country store, where they continue her faith in the fabulousness of southern cooking with flare. Always market-inspired, they source their ingredients within a 100-mile radius, and if they can’t get the right produce, they change their menu. Grits and Groceries has been spotlighted on local programs like Making it Grow, and national TV such as the Food Network and PBS’ Travels with Darley. They have been featured in the New York Times and on CNN.com.

Heidi published a cookbook, Real Food Done Real Good, and always remains active in the community. She is a Chef Ambassador for the State of South Carolina and on the advisory boards for the Atlanta Food & Wine Festival and Euphoria Greenville. She teaches a 4H cooking club, and mentors teens interested in culinary careers.