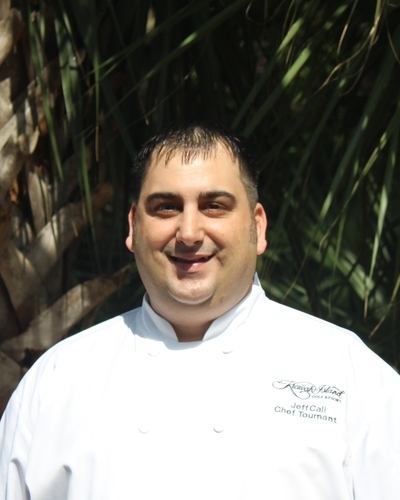 Chef Jeff Cali’s best childhood memories were centered around Sunday family dinners. Coming from an Italian-American family, he has always had a huge appreciation for food. This appreciation turned into a passion when Cali began working at the NHL Hockey Area in Tampa, FL, chef’s hometown. Working as a line cook to pay for school, Cali found himself an outlet for his creativity. After earning a degree in Culinary Arts and Restaurant Management from Hillsborough Community College, he worked his way up the culinary ladder, holding positions at Amelie Arena in Tampa and Longboat Key Club & Resort and Sands Pointe in Sarasota. In May 2011, Cali made his way to the Lowcountry and was named the Executive Sous Chef of Wild Dunes Resort, overseeing the banquet program and 9 additional food outlets. In 2013, Cali ventured into the downtown culinary scene where he led the kitchen at CO Banh Mi & Noodle Bar and Lee Lee’s Hot Kitchen. Enjoying the resort/hotel scene more, Chef Cali made his way to Kiawah Island Golf Resort and is currently the Chef Tournant of Villa Banquets. Chef brings his passion for food to large group settings and elevates it beyond people’s expectations for banquet cuisine. When he’s not behind the stove or breaking down the catch of the day, you will find Cali camping, hiking, watching the Tampa Bay Buccaneers, rocking out at concerts, and if you’re lucky, playing the saxophone.