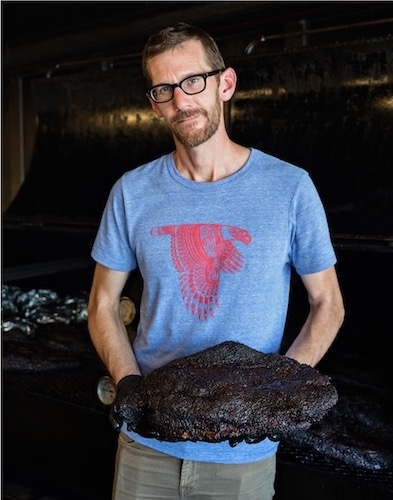 John grew up in El Paso, TX and began his barbecue culinary career in Austin. After a stint in Denver honing his craft in the competition barbecue circuit, John returned to Austin in 2010 to help open Franklin Barbecue, where he pioneered the flavor profile that helped put Austin barbecue on the map.

In 2016, John brought his signature style and love for Honky Tonk music to Charleston, SC, where he opened his first Lewis Barbecue in the city’s emerging Upper Peninsula. Since opening its doors, Lewis has become a staple in the restaurant scene, earning praise from the likes of Garden & Gun, Southern Living, Food & Wine, Bon Appetit, Today Show and The New York Times.

In 2020, John and his team opened JL’s, a tricked-out food trailer on the Lewis Barbecue patio showcasing his El Paso roots and offering flavorful New Mexican food. The popular trailer quickly morphed into a full brick-and-mortar restaurant concept, Rancho Lewis, which opens at 1503 King Street in 2022. Rancho Lewis will boast a large menu with a wide variety of lunch and dinner options, an expansive bar, outdoor dining, an in-house tortilleria, and a mesquite grill for grilled meats and seafood cooked over West Texas mesquite.