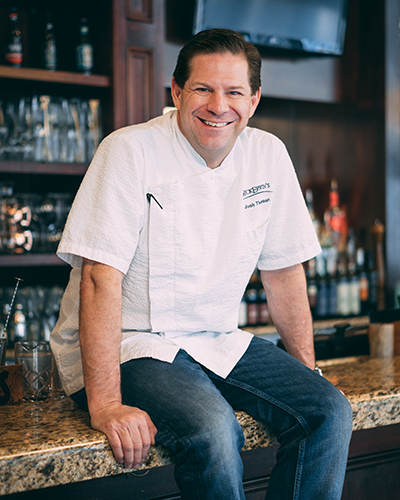 While some young boys dream of becoming astronauts or baseball players, Josh Thomsen’s 6th grade yearbook listed “Chef” as his career of choice. This New Jersey native credits his ambitions to his father Jerry, an accomplished amateur chef.

Named a “Rising Star Chef” in the San Francisco Bay Area by StarChefs in 2010, Thomsen is a graduate of the Culinary Institute of America in New York and honed his skills with some of the most prominent chefs in the country kicking off his career at the Hotel Bel-Air, Pinot Bistro & Patina in Southern California. He then relocated to Aspen, Colorado to work at the Little Nell Hotel, a Relais Chateau property as Chef de Cuisine before moving to Napa Valley Wine Country to work at the French Laundry under Thomas Keller, whom he credits as a major influence on his career. Then after spending two years in the Napa Valley, Thomsen was drawn to the lights, action and many culinary hot spots of Las Vegas where he continued to build his resume at Michael Mina’s Nobhill Tavern as well as opened the 400-seat Tao Asian Bistro at the Venetian Resort. During his two year tenure it became the highest grossing restaurant in the country.

An opportunity as Executive Sous Chef at The Lodge at Pebble Beach lured him back to the California coast and in a few years he was back on the strip as a jet setting Corporate Executive Chef for Innovative Dining Group overseeing the opening of three restaurants – two in Las Vegas and a third in Los Angeles.

Next Josh was back in California as the Executive Chef at the historic Claremont Resort & Spa in Berkeley. Overseeing thirty-three thousand square feet of banquet space, room service for two hundred and seventy-nine rooms as well as three restaurants. It was here that he was awarded the Rising Star Chef for the Bay Area.

Then Josh moved to the east coast to start a family and create a true farm to table restaurant Agricola with its own 110 acre farm in Princeton, New Jersey. Thomsen and his team offered a hyper-seasonal menu inspired by the best ingredients. When Agricola was only five months old, it was named one of the top restaurants in New Jersey and was named one of the top ten best new restaurants in the United States for 2014 by Gayot. Here Thomsen co-wrote the Agricola Cookbook to rave reviews. Then he accepted an offer to help transform the newly branded Eau Palm Beach Resort & Spa in Florida as its Executive Chef overseeing four dining venues, twenty thousand square feet of banquet space and in room dining service for three hundred rooms and a private club floor. After a year there the resort to was awarded Forbes five star / five diamonds considered the highest award a hotel or resort can obtain.

Now Thomsen and his family are happy to call Greenville, South Carolina their home. Close to family and raising their two boys as Josh is the Executive Chef of two restaurants in the Award Wining Rick Erwin Dining Group; Eastside and the newly opened Saltwater Kitchen.

When he is not in the kitchen, he can be found watching his favorite baseball team, the New York Yankees, or his Dad’s favorite football team, the New York Giants, while unwinding with his favorite cocktail, Hendricks & Tonic. He is also a supporter of the James Beard Foundation, Edible School Yard, V Foundation for Cancer Research, Meals on Wheels, Taste of the NFL and Taste of the Kentucky Derby an organization that rallies top chefs to raise money in support of food banks. He enjoys traveling the world to explore new cuisines and cultures having been to France, Switzerland, Italy, Mexico and Russia.