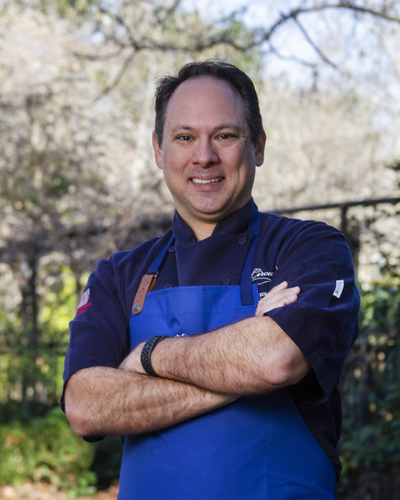 Participating In: The Stars Align

Although his childhood dreams of becoming an Air Force pilot were sidelined due to less-than-perfect vision, Marc Collins quickly found his focus and footing in the culinary world. At age 16, he worked as a chef apprentice aboard the Paradise II, a private yacht with a presidential history, an experience that inspired him to pursue a culinary degree at the Pennsylvania Institute of Culinary Arts. A series of cooking jobs included a post at the Erie Country Club in his hometown, where he served under Executive Chef David Spadafore, a Gold Medal Winner in the Culinary Olympics held in Frankfurt, Germany. In 1991, Collins moved to San Antonio, where he worked at La Mansion Del Rio under French Chef Guy Collinet and, later, at La Louisiane, a restaurant specializing in fine French cuisine and Cajun Creole cooking. At 23, he took his first Executive Chef position at the Fairmount Hotel, a AAA Four Diamond hotel. In 2001, he was recruited to helm Circa 1886 in Charleston. In 2005, Marc had a budding idea for a food and wine festival to be hosted in Charleston, spotlighting the city’s amazing array of talent and ingredients. Thanks to his dedication and countless hours of preliminary planning meetings, that vision became reality in 2006, when the first annual Charleston Wine + Food Festival launched. To honor his critical work in founding the festival, he was the namesake and first recipient of the 2010 Charleston Wine + Food Marc Collins Chef Award. In 2019 he became a South Carolina Chef Ambassador to help continue to spread the word of the diverse culture of food the State has to offer.