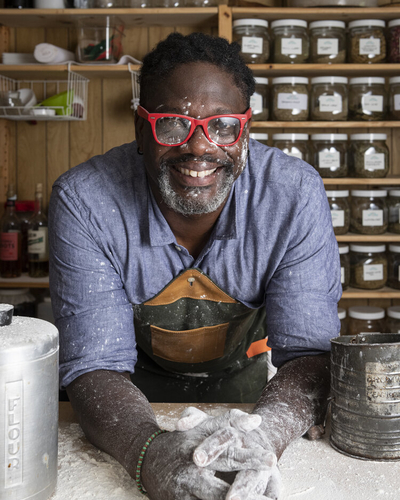 Participating In: Living on the Veg: An Organic, Plant-based Dinner

Raiford grew up breaking the dirt and trading crookneck squash for sweet potatoes, raising hogs and chickens, and only going to the grocery store for sundries. After a military career then graduation from the Culinary Institute of America in Hyde Park, New York, Raiford returned to the farm in 2011 to continue the traditions of his Gullah-Geechee heritage and to create an authentic farm-to-fork experience for locals. He received certification as an ecological horticulturalist from the University of California’s Santa Cruz Center for Agroecology and Sustainable Food Systems.

He served until recently as the program coordinator and associate professor of culinary arts at the College of Coastal Georgia. In 2015, Raiford, the former executive chef at Little St. Simon’s Resort, opened The Farmer and the Larder on Newcastle Street, helping jumpstart the revival of Brunswick’s historic downtown. Raiford has appeared in Southern Living, Golden Isles, Paprika Southern, Garden & Gun, and Savannah magazines, and is a frequent presenter at food and wine festivals throughout the country. He hosts the Heritage Radio Network podcast Jupiter’s Almanac, a show about growing and producing the food we eat.

Gilliard Farms is a family-run organic farm, growing under the watchful eye of sibling farmers Althea Raiford and Matthew Raiford. Gilliard Farms was first established in 1874 by Althea and Matthew’s great great great grandfather Jupiter Gilliard. The farm has never used chemicals to grow any crops and is a member of Georgia Organics, SAAFON (SouthEastern African American Farmers Organic Network), Farms to Grow, and Georgia Grown. Althea & Matthew Raiford are the sixth generation to farm this land.