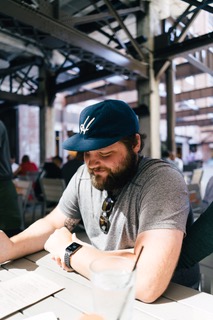 Originally from Pawleys Island, South Carolina, Chef Nick Graves was influenced as a young man by chefs Louis Osteen and Frank Lee, and credits them with providing him the inspiration to become a chef. Graves then spent many years cooking in Charleston, South Carolina, where he met his mentor, Chef Sean Brock, which led to his taking a position at Husk Nashville. Eventually, Graves found his way to New Orleans. He cooked at Commanders Palace under famed executive chef, Tory McPhail, and then worked as a research and development chef for the Rebel Restaurant Group, under chef and restaurateur Phillip Lopez. After New Orleans, Graves landed back in his home state, but this time in Greenville at the foot of the Blue Ridge Mountains to take over Restaurant 17 as Executive Chef of a fine-dining restaurant with a focus on local and responsible sourcing. After 3 years at Restaurant 17 Graves sought after new horizons and a different style of dining. Avanti F&B in Denver Colorado provided a different style on how fast casual concepts work. This is where his fried chicken concept began to make its first appearance. Lea Janes came from the idea of doing great food that would appeal to the collective eatery of Avanti.