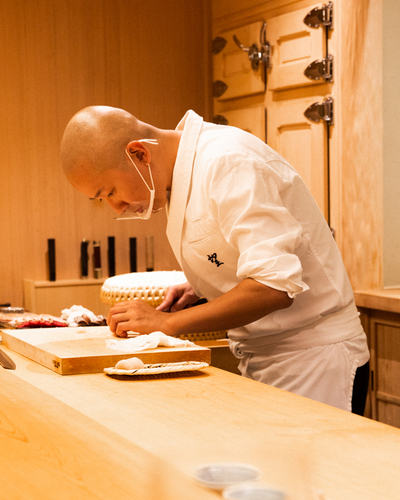 Born in Hokkaido, Japan, Chef Noz was from a very young age inspired by the fresh fish and seafood of his grandfather, who owned and operated a seafood company. This provided him his first experiences with ingredients like uni, salmon roe and king crab, which still stand as cornerstones in his cuisine.

Chef Noz’s culinary journey began as an apprentice in Sapporo. It was here he decided to dedicate himself to the art of sushi. He then moved to Tokyo, epicenter of the centuries-old Edomae style, where he spent years perfecting himself in the techniques of Edomae. This included working with master chefs and preparing dishes with aged, as well as freshly-caught, fish, and traditional vinegar-seasoned rice.
‍
In 2007, Noz moved to New York with the dream of opening his own restaurant and bringing his unique style of cooking to an American audience. After three years at the helm of New York’s legendary Sushiden, Noz opened his namesake restaurant, Sushi Noz. He welcomes you to enjoy the aromas, sensibilities, aesthetics, and tastes of his life’s work.