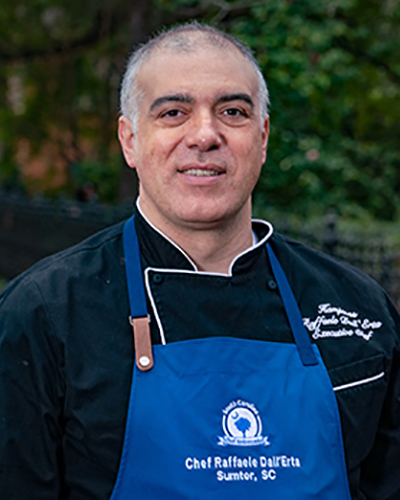 Born and raised in Milan, Chef Raffaele Dall’Erta was introduced to cooking at a very young age. His father’s love of food and skill in the kitchen was a great influence on his youth, as were early foraging trips with his grandmother where the only rule was not to come home empty-handed. Hand-rolling pasta with his father and visits to his grandparents in Parma fueled his passion for food and broadened his culinary knowledge; these early experiences inspired Chef Dall’Erta to embark on a culinary career at age 15.

Chef Dall’Erta attended culinary school at Vallesana in Northern Lombardy and took on apprenticeships which led to positions in top Italian kitchens including Don Lisander and La Rondine. He has spent time in world-renowned restaurants such as The Fat Duck in the United Kingdom and Per Se in New York. After 11 years as the Sous Chef at the renowned Inn at Little Washington, Dall’Erta joined the team at Hamptons. Informed by his childhood and culinary expertise, he uses only the finest cuts of meat and freshest local produce in his menus.