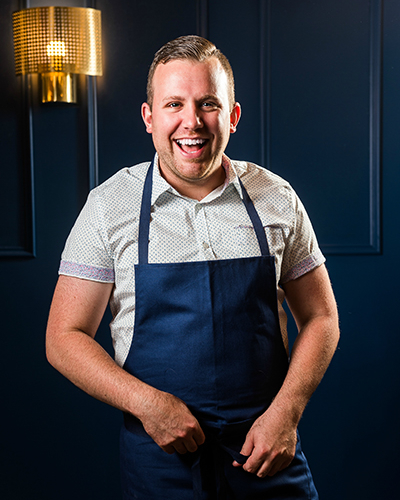 Ryan Ratino is Bresca’s executive chef and owner.  Bresca is a one-star Michelin restaurant inspired by the European movement of “bistronomy”, a movement characterized by a vibrant, experimental and informal approach to cooking and where the main focus is the food, its bold flavors and the feelings that these combinations evoke. This is his first restaurant after having worked in some the nation’s capital most exciting concepts such as the celebrated Ripple, Richard Sandoval’s Masa 14, and the renowned L’Auberge Provençale in White Post, Virginia.

Ratino brings to Bresca a diverse set of skills and a passion for cooking built in some of the most lauded restaurants in the country. During several years in New York City, Ratino was executive sous chef at the Michelin one-star restaurant Caviar Russe, which consequently earned three stars from The New York Times. His fast-track career also landed him several stage opportunities including Wylie Dufresne’s innovative, norm-challenging WD-50 as well as Dovetail NYC and minibar by José Andrés.

A native of Medina, Ohio, and a graduate of Le Cordon Bleu in Orlando, Florida, Ratino launched his culinary career as a junior sous chef at Shula’s Steak House at the Four-Diamond AAA award-winning Walt Disney World Swan and Dolphin resort. After, Ratino spent a three-year tenure working under Todd English at Bluezoo where he advanced quickly to serve as the destination restaurant’s executive chef. Under his direction, the restaurant was named one of the “10 best foodie spots in Orlando” by USA Today.

Ratino describes his cooking as, “seasonal American with European roots.” At Bresca he looks celebrate the bounties of earth and take guests through a seasonal culinary journey with an evolutionary menu that highlights creative and contemporary flavors with responsibly sourced products.

An advocate of environmentally-friendly practices, Ratino enlisted Bresca as the first and only carbon neutral restaurant in the nation’s capital by joining ZeroFoodprint, the nonprofit organization aimed at helping restaurants and diners reduce their climate impact. As part of this initiative, Chef Ratino and the team work to interlace sustainability into the daily practices of restaurant operations such as recycling, composting and sourcing products from purveyors who prioritize sustainable practices.

In the summer of 2017, Ratino was named and awarded the Rising Culinary Star by the Restaurant Association of Metropolitan Washington (RAMW).  Earlier this year, he announced the opening of his second restaurant, Jônt, an 18-seat kitchen experience which will offer a progressive menu format of 8-11 courses that will include an eclectic mix of worldwide cuisines representative of DC’s crowds.  The new restaurant is slated to open at the end of Spring, 2019.