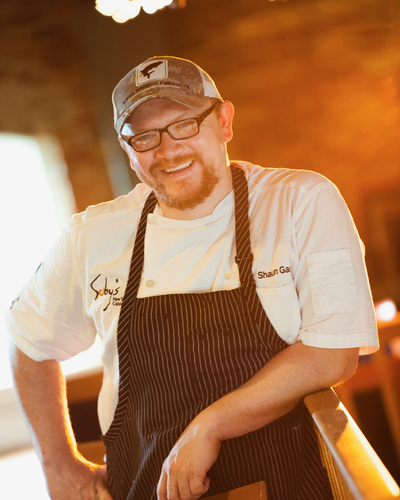 Participating In: Taste of the South and Seeing Stars: A Michelin-starred Dinner

Born and raised in a mill town in Spartanburg County, South Carolina, Shaun’s interest in food began early; he practically grew up in the kitchen of his grandmother’s restaurant. The family-owned establishment was a true southern restaurant and taught Shaun the most important thing in the restaurant industry is hospitality. Shaun spent his early years learning about the importance of southern food and culture. Today as Executive Chef at Soby’s, Shaun takes that heartfelt flavor of authentic Southern cooking and adds fresh style for an unexpected dining experience. In 2010, he took his commitment to heirloom ingredients to the next level by establishing the Soby’s Field at Dark Corner, an ambitious project that raises produce from the Slow Foods Ark of Taste list for use in the restaurant. The Ark of Taste, a collection of food items in danger of extinction, promotes and protects the vibrant flavors of American ingredients, and by growing these items for Soby’s, Shaun is assuring that the restaurant will be able to offer dishes that honor culinary history.

He joined Table 301 Restaurant Group in August of 2003 as a line cook, and his innate talent for Southern cooking led him to take the helm of the Soby’s kitchen in January of 2007. He is a participant in the annual Euphoria festival, a first-class culinary celebration that raises funds for charities while promoting tourism and enhancing the reputation of Greenville, S.C. as a premiere culinary and performing arts destination. Shaun enjoys being a part of local non-profit events each year, such as the March of Dimes Signature Chef’s Auction, Fall for Greenville and Hospitality Day at the State House.

One of Shaun’s primary goals in dish development is to use seasonal ingredients and local products whenever possible in order to support local food producers and provide the best flavor for his guests. He draws on his profound experience with Southern food traditions to bring time-honored recipes with modern flair to the table. In addition to taking inspiration from his family heritage of Southern cuisine, he uses techniques like a French slow braise to bring out the potential in lesser-used cuts of meat and uses traditionally African ingredients like okra and yams that have historically brought wonderful flavor to Southern food.

He also enjoys working with bourbon, a spirit that he says lends itself well to the hearty, earthy flavors of Southern cuisine and matches his recipes in heritage and history. Shaun’s cuisine is a study in culinary history, updated for the modern palate. He is a member of the Southern Foodways Alliance, Seed Savers and Slow Foods. He has been featured several national publications, including Cooking Light, Garden & Gun, and Taste of the South.