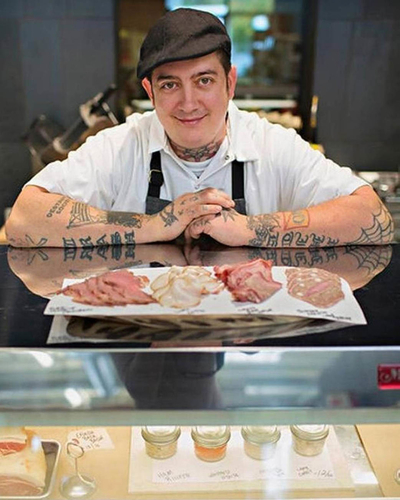 Participating In: Feast by the Field Saturday & Sunday

Steven Goff is the previous head butcher at Standard Foods in Raleigh, and is the former Executive Chef and Owner of the King James Public House and AUX Bar in Asheville. Steven left home at fifteen, and spent the next eleven years homeless, jumping freight trains across the US and Europe, cooking wherever his travels took him. After being stranded in Asheville, he got more serious about cooking enrolled in the AB Tech culinary program receiving degrees in both Culinary Arts, and Baking and Pastry.  Because of his early life experiences, he is highly dedicated to supporting the local community through his food. He co-directed the popular local fundraising event The Blind Pig Supper Club, and served on the Board of Directors of Asheville Independent Restaurants.  Chef Goff’s cuisine has been recognized by Food and Wine Magazine, Bon Appétit, NY Times, Chicago Tribune, Garden and Gun, and various local publications.  In 2019 he was named Chef of the Year by the North Carolina Restaurant and Lodging Association.  He lives in Asheville with his wonderful wife Samantha, his daughter Emma, and their array of animals.