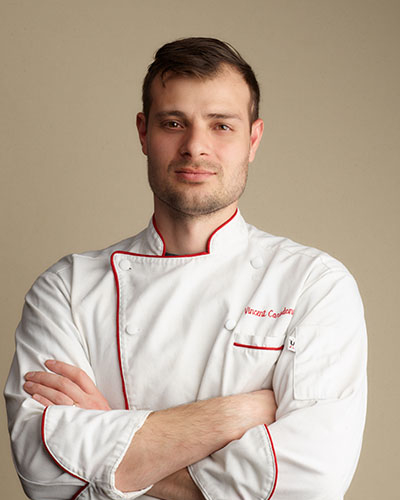 Vincent Caradonna shared his time between Geneva and Paris, two cities with long traditions of chocolate excellence. Providing an ideal background for what would become his vocation, Vincent chose the French Capitol as the starting point of his Career. After being part of the Young French Elite Chocolatier, Vincent moved to New York to work under Master Chocolatier Jean-Francois Bonnet at Tumbador Chocolate. After a few years at Tumbador Chocolate making the finest chocolates in New York. Vincent was known for his craft and was rewarded by making show pieces for all Presidents coming to the United Nations General Assembly 2 years in the row until he headed to the others side of the Pacific Ocean to be part of the largest Chocolate Factory in Australia. Becoming a consultant, Vincent traveled the world.

In 2013 Vincent came back to his place of heart, New York City, where he opened a fine chocolate shop in Brooklyn Heights. In 2014, he opened an ultra luxurious chocolate brand “The Lost Sense, Chocolate by Design”. An avant-garde chocolate brand where the chocolates looked like jewelry.
A year later Vincent left New York to manage the chocolate operations of Jean-Philippe Maury at the prestigious Bellagio and Aria Hotels in Las Vegas. After prestigious events like the “Ultimo”, Vincent decided to move back to the East Coast.
In 2016, after managing the operations of one of the oldest bakery in Atlanta, he took the decision to open another shop in Greenville, SC; His wife home-town. Today, Vincent operate all affaires from Greenville, while providing the highest quality of bake goods and Chocolates.