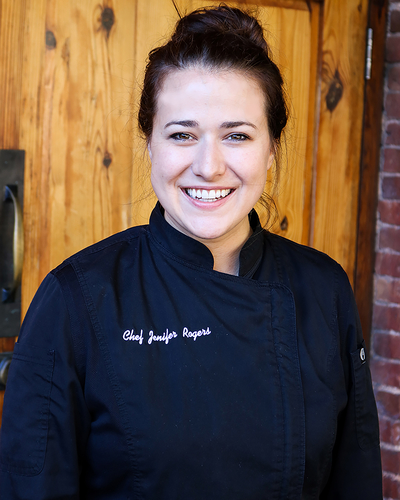 Participating In: A Trip to the French Quarter

Jenifer Rogers’ culinary journey has taken her throughout the southeast, including operating her own bakery and restaurant in Alabama and working in Nashville, TN, where she catered to some of country music’s biggest stars.  When she landed in Greenville, SC, not only did she find the opportunity to expand her skills at Table 301 but also met the love of her life.

Jenifer was born in LaGrange, GA, but she grew up in Sheffield, AL, under the watchful eye of her grandmother who helped instill her passion for food and cooking.  At age 14, she got a taste of the restaurant business working at a ballpark concession stand, one that made homemade chili, chicken salad, and freshly cooked burgers.  She quickly learned that serving quality food was the key to keeping customers coming back for more.

Once she graduated from high school, Jenifer moved to Tuscaloosa, AL, and started college.  She worked as a server before heading to Nashville in search of a culinary degree and more opportunity.  Jenifer landed at Union Station, a well-known Nashville restaurant located on Broadway.  Her experience there allowed her to move to The Listening Room Café, a high volume entertainment venue.  Here she worked as a kitchen manager before quickly taking over Catering and Events where she worked with many country music artists.

In 2015, Jenifer moved back to Alabama and used her culinary experience to build and operate her own restaurant, The Victorian Tea Room Bakery, and The Wild Lilly restaurant.  She sold it in 2017, and made a move to Greenville where she was hired by Soby’s as a Sous Chef and soon met her future husband, Michael Minelli.  She was later promoted to Executive Chef of Passerelle Bistro, which allowed her to work side-by-side with Michael, the general manager/part owner of the restaurant.  Jenifer plans to continue her culinary journey with Passerelle, showing that hard work, motivation and perseverance can take you far and proving to young women that they can be whatever their hearts desire.

Jenifer and Michael were thrilled to welcome a son into their family recently.  When they aren’t working, the couple enjoys spending time outdoors.