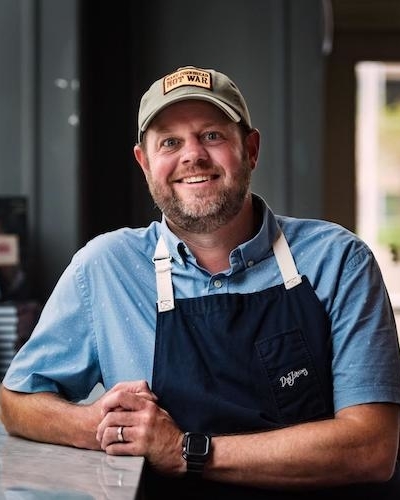 Participating In: Taste of the South and Feast by the Field Sunday

A deep rooted passion for fine food and the outdoors motivated husband and wife duo Matthew and Jessica Register to start Southern Smoke BBQ of NC, which boasts two barbeque sauces that quickly became a hot commodity in Eastern NC.  Nestled in the small, southeastern rural town of Garland (think one caution light, a few businesses, and friendly townsfolk who call each other by name), Southern Smoke BBQ of NC has become a must stop for those who travel anywhere near Eastern NC.

Founded in 2010, Southern Smoke BBQ of NC formally began when Matthew began smoking pork (and practically anything else he could get his hands on) the old-fashioned way, slow and low over oak wood.  He then began experimenting with sauces and created Sweet Grace, named after their daughter, and Two Brothers, named after their sons.  Of course, both sauces had to pass numerous taste tests by family and close friends long before they made it to your table…nothing but perfection for the customers, of course!

However, the real family tradition dates back to when Jessica’s great grandfather, Dan Nipper, who owned Dan’s Old Fashioned Barbeque of Sanford, NC instilled his passion for BBQ in his three children.  Jessica’s grandfather, Jimmy Nipper, took great pride in cooking for his own children and grandchildren through the years and they all share his love for great southern BBQ.

After years of dreaming about the ideal smoker, Matthew, along with Jessica’s Uncle Shawn, designed the famous smoker close friends and family know by the name of Jezebel.  Uncle Shawn worked hard to perfect Jezebel and they were excited to finally put her to use.  Every time Matthew fires up his smoker Jezebel, he and Jessica are reminded of Papa Jimmy and the great love he had for BBQ.  Most importantly, they remember Jimmy’s deep love for his family.

Matthew and Jessica take great pride in cooking traditional, southern BBQ and try their best to communicate that love through every aspect of their business.  Their deepest hope is to keep delicious family culinary traditions alive and share them with good ‘ol folks who just enjoy great food.

The catering headquarters and restaurant opened in downtown Garland, NC on Warren St. in April 2014. Restaurant hours are Thursdays and Fridays only, with doors opening at 11:30 AM sharp.  Pre-orders on ribs are recommended (with at least 24 hours notice).

On May 7, 2019 Matthew released his first cookbook entitled Southern Smoke: Barbecue, Traditions, and Treasured Recipes Reimagined for Today! In his book, Matthew explores the dishes and foodways from iconic barbecue regions – North Carolina, the Lowcountry, Memphis and the Delta – sharing anecdotes along the way about everything from Eastern versus Western based BBQ sauce to the origins of Marigold Tomatoes in the Delta and pitmaster tricks-of-the-trade. Southern breads find a home here as well, including everything from skillet cornbread and benne seed biscuits to chocolate chess pie and pecan-studded bread pudding. To purchase a copy of Matthew’s cookbook, please click on the cookbook link on this site.

Whether you’re a first timer or a loyal customer, Matthew and Jessica look forward to seeing you in Garland! There’s a reason why friends and family call Southern Smoke BBQ the best they’ve ever had.  If you’ve never tried them, you must!