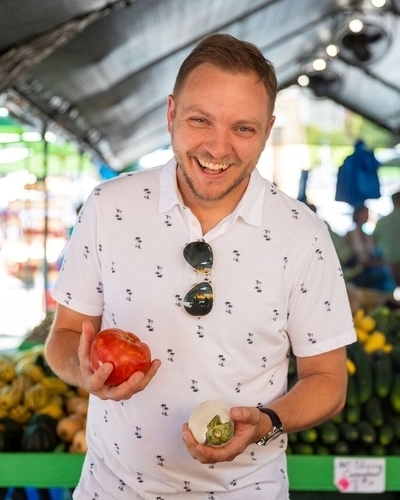 Participating In: Taste of the South, Bubbles & Fantaseas and Feast by the Field Sunday

Family is at the core of everything for Chef Chris Coleman.

A native Charlottean, Chris first gained an appreciation for local ingredients and fostering community while spending summers on his grandparents’ farm in Mississippi. The access to fresh, locally-grown food imprinted on his budding culinary mind, as did the intimate, hands-on experience with Southern growing seasons.

Chris was never far from Southern food. He was 14 when he started his first industry job at a local fish camp, working his way up through the ranks from busser to kitchen expediter.

While a student in Central Piedmont’s culinary program, Chris took a job as a line cook at the McNinch House, one of Charlotte’s most storied fine dining restaurants. He was quickly promoted to head chef at the age of 21.

Seasonality and celebrating the bounty of North Carolina, specifically the Piedmont region, motivated Chris to create a pop-up dinner series. The Market Kitchen used only locally-sourced ingredients prepared with experimental, modern cooking techniques. Chris followed up these early ventures by opening The Asbury, a 40-seat farm-to-fork restaurant at The Dunhill Hotel. Under his direction, the restaurant won multiple Charlotte Magazine “Best of the Best” Awards.

As director of culinary experience at Charlotte Marriott City Center, Chris helped lead the team that reinvented food and beverage for Marriott international. Stoke, Stoke Bar, and Coco and the Director are brand firsts at Marriott’s M Beta hotel, where Chris oversaw all culinary aspects.

In 2020, Chris stepped into the kitchen at The Goodyear House in Charlotte’s NoDa neighborhood. The Goodyear House is built on a shared history of community and kinship. The bar and culinary programs celebrate the best in seasonal, locally-sourced Southern ingredients. Praised by critics and the public alike for it’s innovative cuisine, restored interiors, and chill backyard vibes, GYH has been recognized for numerous accolades in its short history.

In 2021, Chris and the team behind GYH opened Old Town Kitchen & Cocktails in Rock Hill, SC, a laid-back, family driven eatery that is an ode to neighborhood restaurants that Chris grew up frequenting with his parents. Sourcing from the best local and regional vendors, Chris has created a menu full of classic meat-and-twos, sandwiches, salads, and scratch desserts just steps away from the Rock Hill Sports & Events Center, Winthrop University, and downtown Rock Hill.

Chris is happy to still call Charlotte home, where he lives with his wife Ashley, and children Luke, 9, and Ellie, 5.