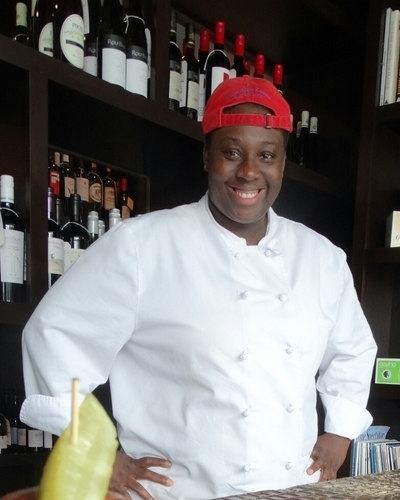 Participating In: Taste of the South, Classic Hits and Feast by the Field Sunday

St. Vincent and the Grenadines is a fishing community and a large agricultural hub. Growing up on the tiny island where most of her family was nurses, social workers or mechanics, Chef T spent her early years helping to raise livestock and cooking in the kitchen with her grandmother.  She became very fascinated with food as she watched her grandmother feed everyone who came to the make shift garage her mechanic cousin had set up in the front yard of their house.  It was quite possible, that as early as six years old, “T” knew that she wanted to someday be a Chef.

After 10 years in FOH management, the desire to work in a professional kitchen was insatiable. Now residing in Atlanta, she enrolled in Le Cordon Bleu.  After a chance encounter at a school career fair, she connected with the Executive Chef of The St. Regis Atlanta and within a few weeks she was embarking on her first job in the fine dining arena.  In 2012, Chef T graduated with an Associate’s Degree in Occupational Sciences of Culinary Arts.  She would spend the next 2 years putting in work in a very unforgiving industry, trying to make a name for herself.

In the summer of 2013, Chef T auditioned for Fox’s hit reality show “Hell’s Kitchen”. After several rounds of interviews she was chosen as a contestant to represent Atlanta.  “T” was not only witty, but she appeared to be one of the few contestants that could cook and didn’t crack under the pressure.  After 16 intense rounds of competition she was the runner up of Season 14.

After returning home from filming she has graced the kitchens of elusive chefs like Kevin Rathbun and vacation meccas like Sea Island. T returned as a veteran on Season 18  Hells Kitchen where she placed 12th. These day you can find her creating delights in a private kitchen near you by night. By day she is the Campus Executive Chef at Radford University in Virginia.