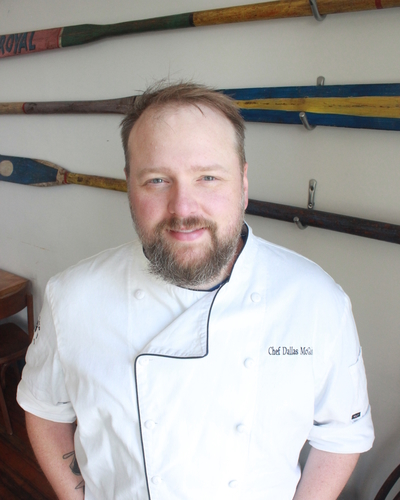 Chef Dallas McGarity grew up in rural Orangeburg, South Carolina. Food was always an important part of life in the farm community where he grew up and his mom and mamaw instilled a passion for it at an early age. From shucking corn to shelling beans and learning the old recipes of his family’s past he made a choice to attend culinary school at Johnson & Wales University in Charleston SC. Working in Charleston, SC for many years, he moved to Louisville, KY in 2004.  Chef Dallas was encouraged that the Louisville food scene had much to offer a young chef and fell in love with the city. After working at several fine dining places in Louisville as Executive Chef, he was ready to open a restaurant as both Executive Chef and Owner.  With the help of his wife, Laura, The Fat Lamb Modern Kitchen & Bar opened in November of 2016. The small, open-kitchen concept has received a great response from the highlands neighborhood within which it is located and continues to serve both local patrons and visitors upscale comfort food with an emphasis on locally sourced ingredients. Chef Dallas continues to support the community by doing many charity events each year and trying to give back to the community whenever possible.