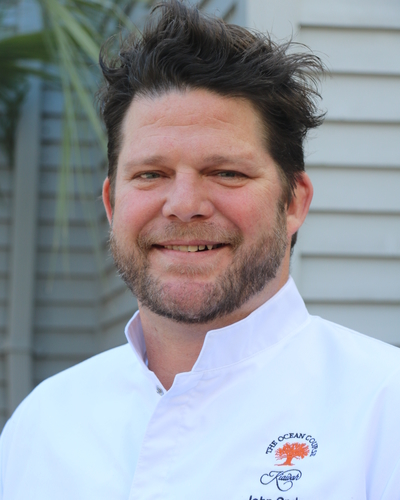 A native of Charleston, Chef John Ondo comes to us with over 20 years of experience. Through his studies at culinary school and working front-line at several well-known Charleston restaurants, he has been able to hone his own approach to food.

Having earned degrees in hospitality management and culinary arts at the Culinary Institute of Charleston, he extended his education in Italian cuisine with a lot of book-learning and hands-on experience in several prominent Italian kitchens, notably Il Cortile Del Re. He developed further knowledge of broader cuisines and techniques in the kitchens of institutions like McCrady’s and Carolina’s.

His unpretentious presentations of “just good food” got their own showcase when Ondo launched Lana in Charleston in 2005.  As Chef/Owner of Lana restaurant, he spent 13 years refining his rustic approach to refined Mediterranean cuisine, making every effort to interpret his ideas through local ingredients and to maintain a respect for the basic elements of a dish while still allowing it to be influenced by seasonal changes. He was involved in every aspect from construction to the sale of the restaurant in 2017. In addition to his role as Chef/Owner, Ondo has been an adjunct professor of Mediterranean cuisine at the Culinary Institute of Charleston and most recently, completed recipe, menu, and product development for Kairos, a New Greek QSR franchise. He has been evolving ever since and is looking forward to expanding his working knowledge and experience.