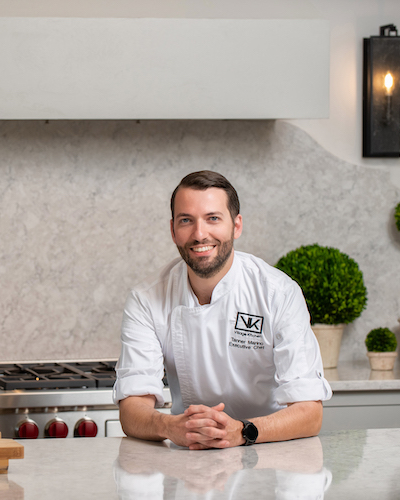 Participating In: Aged to Perfection

As Executive Chef for Hay Creek Hotels at Hartness, Chef Marino is responsible for overseeing Village Kitchen, an elevated fast casual dining experience on Greenville’s Eastside. In this role, he also oversees banquet catering for the entire Hartness development and will also lead the culinary direction for Patterson, a fine dining restaurant located in the forthcoming Hotel Hartness. Marino lived in the south for most of his life and grew up in a family where the tradition of coming together over a homecooked meal was constant. After finding himself gravitating towards the kitchen in his teens, Marino enrolled in culinary school before moving to Greenville, where he began his career at Devereaux’s. Under the tutelage of Devereaux’s Steven Greene and Spencer Thomson, he worked his way up to Chef de Cuisine of the acclaimed restaurant. Marino continued his career at Hyatt Regency in Greenville and The Umstead Hotel and Spa in Cary, North Carolina. He comes to Hartness from the Westin Chattanooga where he served as Executive Chef.