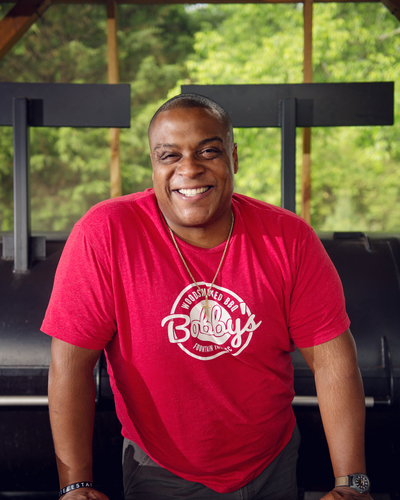 Tay Nelson co-owns and operates Bobby’s BBQ alongside his wife, Sarah. Bobby’s BBQ is located in Greenville County, South Carolina in the beautiful town of Fountain Inn where Tay was raised. Tay started in the culinary world early, where at the age of twelve, he started in the dish pit of his Father’s restaurant; with his unparalleled work ethic and drive he managed to be promoted to manager of the luncheon service all while still in High School. Sadly, in 2008 and 2009 respectively, his father and brother, Bobby Sr. and Jr. passed away. Spurred by the desire to keep their memory alive, Tay created an All-Purpose Seasoning by blending together spices his father used in his recipes and adding his own preferred all-natural ingredients.

In 2014, Tay fell in love with Central Texas style BBQ after running across videos by Aaron Franklin online. He dove in head-first and continued to study the craft as well as reach out to experts in the business to learn all that he could about smoking meats and the BBQ industry as a whole – his wife often had to tell him to stop researching and go to bed! In 2017, he was blessed to be able to travel to Austin, TX for a 2 1/2 week long internship at award winning Terry Black’s BBQ in Austin, TX, honing his skills even further. In 2018, he opened his restaurant, Bobby’s BBQ where he serves beef brisket, pulled pork, beef and pork ribs, turkey, house-made sausage, & homemade sides which are all seasoned with Bobby’s seasoning blends.

Tay has been married to his wife, Sarah, since 2013. They have 5 beautiful children that always keep them on their toes!